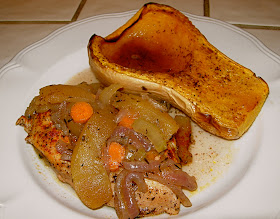 Tonight's dinner was a "cupboard clean-out experiment". It was very interesting, very Fall, very comforting, very aromatic, and very delicious! We all enjoyed it... hope you do, too!
Sometimes the most fun I have cooking Paleo is when I don't have any kind of a plan and I'm forced to just create recipes with ingredients I have on hand. After tonight... I'm convinced anyone can create Paleo meals!

Preheat oven to 350 degrees. Heat coconut oil in a skillet. Sprinkle chicken breasts on both sides with salt, pepper and paprika. Brown chicken breasts in coconut oil (about 2-3 minutes each side). Remove chicken to a plate and add vegetables and apples to the skillet. Cook over medium heat until veggies are tender (about 5 minutes). Add cinnamon, thyme and sea salt. When fragrant, add chicken broth and apple cider. Place chicken pieces back in skillet. Cover and cook in the oven for 20 minutes until done! Serve chicken with the apple/onion vegetable mixture and juice spooned over the top.
Enjoy!