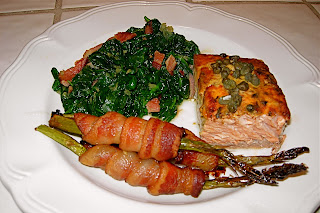 I thought this was a hearty and decadent meal. It seemed the right thing to do for a Holiday! If you enjoy bacon (and I haven't met anyone who doesn't) then I promise you will love this!
The bacon-wrapped asparagus spears make a great appetizer, too! (I know what I'm bringing to my next Paleo party!)
Enjoy! :-)
Ingredients
1 large Salmon filet (wild-caught)
1 T spicy stone ground mustard
1 T capers
1 package bacon, uncured (reserve two slices for the spinach)
1 bunch asparagus (on the thicker side)
1 T olive oil
1 bunch fresh baby spinach (or 9oz pre-washed bag)
2 cloves garlic, minced
(2 sliced cooked bacon)... chopped
ground black pepper to taste
Preheat oven to 350 degrees. Brush mustard on fish and top with capers and black pepper. Bake salmon for about 10 minutes. Remove from oven. Turn on Broiler. Cut bacon slices in half and wrap around a piece of asparagus. Place on a broiler pan. Broil for about 10 minutes, or until bacon browns. When bacon is browned, turn asparagus over and broil for another 10 minutes (or so) to brown the bottom side. Set aside. Put salmon back under the broiler for just about 5 minutes to brown the mustard topping. Serve with bacon-wrapped asparagus spears and sauteed spinach.
Spinach~
I cooked up a couple extra pieces of bacon to add to the spinach! Heat olive oil in a pan and saute garlic. Add spinach and toss until it cooks down. Toss in the bacon pieces!
Absolutely yummy!
Posted by Kelly Greco at 7:12 PM

Allow me to be the bearer of shocking news: my boyfriend doesn't like bacon.

What??? No bacon or coconut? That's absolutely crazy talk! :-)

you can send his bacon my way ;) 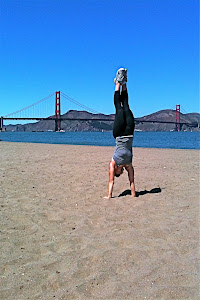